Rays Find Elite Value All Over

[Note: Willy Adames is counted for both Tampa Bay and Milwaukee (not shown). While he, specifically, was markedly more valuable for Milwaukee, counting him and similar players on both teams is sufficient for this article.] 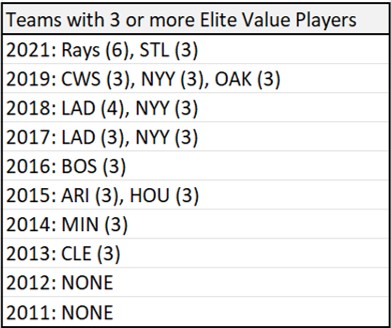 Over the past 10 full seasons, only 14 out of 300 teams had at least 3 Elite Value position players. The 2018 Dodgers had 4 and are the only other team with more than 3: Cody Bellinger, Max Muncy, Kiké Hernández, and Chris Taylor.

Expanding the criteria to explore its arbitrary nature, I also looked at position players that produced at least 2 bWAR with a salary below $4 million. Of the 71 such High Value position players in 2021, the Rays had 9. The next closest team, again, was the Cardinals with 5. 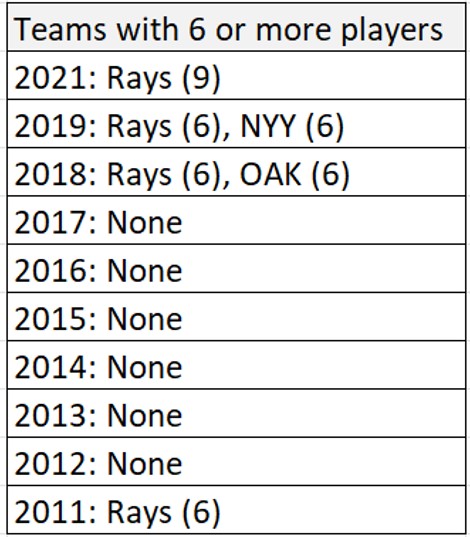 Over the past ten years, a team has had at least six High Value position players just six times, and a whopping four of them were the Rays. The only team to exceed six such players was -- surprise! -- the 2021 Rays with nine.

By either measure, the Rays 2021 season was very special in terms of position player value. How were these Elite Value players acquired?

Randy Arozarena loudly introduced himself during the 2020 MLB Playoffs when he seemingly came out of nowhere to hit 10 home runs in 20 games with a ridiculous 1.273 OPS. The Rays acquired Arozarena ahead of the 2020 season from the Cardinals along with Jose Martinez and a draft pick in exchange for Matt Liberatore, Edgardo Rodriguez, and a draft pick. Arozarena wasn't able to maintain that insane homerun pace in 2021, but he was named the American League Rookie of the Year.

Lowe is the only player on this list that was drafted by the Rays. A third-round pick in 2015 (87th overall) out of the University of Maryland, Lowe has comfortably exceeded expectations. Of the 1,215 players drafted in 2015, only Alex Bregman (2nd overall), Andrew Benintendi (7th overall), Walker Buehler (24th Overall), and Paul DeJong (131st overall) have more career bWAR so far.

In 2019 the Rays traded Mallex Smith and Jake Fraley to the Mariners for Mike Zunino, Guillermo Heredia, and Michael Plassmeyer. In his first 2 years with the Rays, Zunino struggled offensively and had a combined -0.3 bWAR. Following the 2020 season, the Rays re-signed him for $2 million (with a club option for 2022) and were rewarded with a 3.8 WAR season, the 3rd most for a catcher in 2021.

You won't see Wander Franco’s name on this list again after he signed an 11-year, $182 million contract. He originally signed as an international free agent as a 16-year old. Consistently atop prospects lists since he signed, Franco has the potential to be one of the best players in the game. He played in just 70 games during his rookie season, but his 3.5 WAR in less than half a season is nothing short of remarkable. Only seven hitters in 2021 had a lower strikeout rate (min 300 PA’s), and of those seven, only Yuli Gurriel had a higher OPS+.

Before Franco took over at shortstop, the position was manned by Willy Adames. The Rays acquired Adames along with Drew Smyly in the 2014 David Price trade. Adames was having a good season in low-A but entered the year ranked 30th on Baseball America's Tigers top 30 prospects list. A 2018 rookie, Adames had his first Elite Value season in 2019 and was on-pace for another in the shortened 2020 season. His production declined in 2021 before he was traded to Milwaukee, where his production sky-rocketed to 3.5 WAR in only 99 games.

These six players were acquired in different ways across seven seasons. Lowe (draft) and Franco (international free agent) are home-grown talents, while Arozarena, Wendle, Zunino, and Adames were all acquired via trade.

With a committment to competing at a high level despite historically low player payrolls, it's important for the Rays organization to find all-star production from inexpensive players. Having this many in a single season suggests quite a bit of luck, but the Rays' historical success with Elite Value production shows there is more to it than just luck.

As a former soft-throwing submarine college pitcher, I have always been a fan of the underdogs and finding value where others overlook.